The City of Vaughan joined the Province of Ontario on a successful business mission to China in November to increase trade opportunities for businesses in Vaughan, create strategic partnerships with Chinese companies and establish Vaughan as a preferred location for investment.

This final article in the three-part series takes a closer look at Chinese history and culture and how Vaughan is working to deepen our friendship agreements with China.

In 1995, Vaughan signed a Friendship Agreement with Yangzhou City to develop culture and educational exchanges. Yangzhou is known as a museum city, boasting a rich collection of museums, including China Block Printing Museum and Yangzhou Museum, China Huaiyang Cuisine Culture Museum, a Chinese paper-cutting museum, a bonsai museum and an industrial museum. 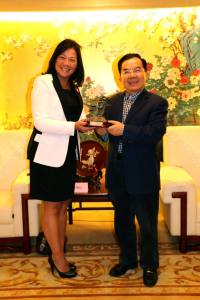 Since 1995, Vaughan has visited Yangzhou in 2008, 2010, 2012 and during the most recent mission. In March 2015, the Yangzhou Municipal People’s Congress and Science and Technology Bureau delegation came to Vaughan and toured Mircom Group of Companies. During their visit, they invited Council and Vaughan officials to celebrate Yangzhou’s 2,500th anniversary on Sept. 29, 2015. Although Vaughan officials couldn’t attend on the anniversary date, the China mission was a great opportunity to not only celebrate Yangzhou’s 2,500th anniversary, but also the 20th anniversary of Vaughan and Yangzhou’s Friendship Agreement. Vaughan proposed elevating the status of our cities to a Sister City Agreement, and since returning from the mission there have been followup discussions focused on making this happen.

Councillor Racco and Elaine also received a tour of the Yangzhou People’s Congress to meet with director Wang Yu Xin. Yangzhou is very interested in strengthening its relationship with Vaughan to foster business matchmaking opportunities and cultural exchanges. Yangzhou would also like to be a partner in the Vaughan International Commercialization Centre (VICC) as a matchmaking partner and soft-landing spot for businesses. Vaughan remains engaged with Yangzhou, welcoming future delegations and providing workshops for Canadian businesses wanting to learn about doing business in China.

In the City of Nanjing, Councillor Racco and Elaine paid their respects to the victims of the Nanjing Massacre at Memorial Hall. On Dec. 13, 1937, and over a period of six weeks, Imperial Japanese Army forces brutally murdered 300,000 Chinese people, including both soldiers and civilians, in the city of Nanjing. Then the capital of Nationalist China, Nanjing was left in ruins, and it took decades for the city and its citizens to recover from the attacks.

Nanjing is the capital city of Jiangsu province, and twinned with the Province of Ontario. This year is the 30th anniversary of the Twinning Agreement.

CULTURE OF FILM AND ART

While in Shanghai, Councillor Racco and Elaine met with Dr. Bo Jiang, president of the Shanghai Film Art Academy, and associate assistant Shao Xiang. They toured the academy, sat in on a film class and learned about the academy’s student programs and film and performing arts projects.

The academy features a new 120,000-square-metre campus made up of seven buildings that can house up to 8,000 students. A learning centre for filmmaking, animation, design, dance and music, the academy is a college sponsored by the Shanghai municipal government and staffed with teachers who are working professionals and experts from around the world specializing in media and the performing arts. This experience was a great learning opportunity for supporting the development of a cultural centre and arts academy in Vaughan.

Councillor Racco and Elaine were excited to promote the Vaughan Film Festival (VFF) and a potential partnership with the Shanghai Film Art Academy. A partnership would give Shanghai students an opportunity to submit their films to be showcased in next year’s VFF. The academy is also interested in becoming a partner for soft-landing and matchmaking opportunities with the VICC. Plans to discuss opportunities for collaboration will take place in early 2016.

Also while in Shanghai, Councillor Racco and Elaine were introduced to George Randolph, president and founder of the Randolph Academy for the Performing Arts in Toronto, who expressed interest in exploring the potential of expanding his performing art programs in Vaughan. Mr. Randolph has partnered with Shanghai to create international student exchanges and dance productions that will tour Ontario and China. He has already tested out the international market for an arts education program — four years ago he launched a successful partnership with Amman, Jordan’s Stardust Academy, the country’s first performing arts school. Overall, the meeting was successful, providing research material for a potential Vaughan arts, design and cultural campus.

THANKS FOR TUNING IN

The China mission was an amazing opportunity that brought many successes to Vaughan. Thank you for tuning in to this series as we shared our experiences and lessons learned with you. Don’t forget to read part one, which outlines all the successes the China business mission brought to Vaughan and how we’re creating lasting, long-term partnerships that will increase our competitive advantage and support our local businesses and economy.

You can also read the second blog post of this series, which looks at how cities in China are transforming under-utilized space into liveable, walkable and enjoyable cultural hubs complete with complex transportation systems.